Hello and welcome back to my first review of the Stand Alone Complex. I haven’t watched this series before, but I’m now beginning to learn more about these characters. I’ve watched this episode a couple of times because it felt like a voiceless episode. However, with each viewing, I did notice little moments that made this fictional world feel more tangible. More so with the Major because you start to see some of her inner issues arise with some subtle moments. Speaking of Kusanagi, in the Manga, the Major is much younger and more feminine than her anime counterparts. In the Stand-Alone Complex, the creators decided to give her a much older body to match her mental state.

The Major is asked by a friend to look into a young girl’s heart transplant. Kuratan is concerned because the new heart was given without the consent of the owners. The girl’s parents feared she would need a full cyborg conversion before the operation, which brings back some emotional memories for the Major. Aramaki believes this may be part of a kidnapping ring and sends the Major and Togusa to Medetic, to investigate the case. 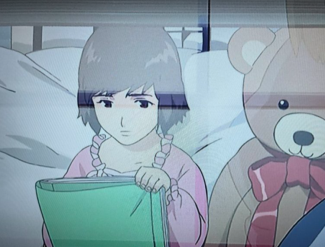 At Meditec, a Johnson cyborg explains to the Section 9 duo that he is happy to help their investigation. The Major learns that a police officer involved in the case is now in hospital after an accident. However, when they reach the ward, a suspicious pair of men are found, and they make a run for it, leaving the police officer lying in a catatonic state. The Major and Togusa pursue the men to a getaway car and follow the gang. Togusa releases a sensor array to locate the car’s registration plate leaving screeching cars and near-collisions on the freeway.

The gang soon start to panic about who’s following them. Having no cell phone signal only increases the paranoia. Finally, at the docks, and after a tachikomo sprays bullets at the gang, Batou and Togusa take three of the men into custody. However, the Major decides to teach the fourth gang member a lesson. Kusanagi poses as a Yazuka enforcer with a large combat knife, finally locating the last man. Begging for his life, the Major raises the knife and brings it crashing down onto a water pipe. The students are kindly advised to have a career change, why they still have a chance. Back at Section 9, Togusa and Batou debate the ethics of organ replacement and cybernetics and how the Major took the case personally. Finally, Kusanagi lets Batou and Togusa know that normal service is resumed for now.

I guess discussing the stand-alone complex series, one episode at a time is going to be a bigger challenge than I expected. I suppose it does let me explore the franchise a little deeper. However, I was not blown away by the storytelling in this episode. It was confusing to understand what was happening with the child and the donor. Why are the parents not present, why are wealthy students deciding to steal body parts, and why does a favour for a friend become a section 9 operation? Still, these are minor gripes, and I guess these are just writing prompts to tell a story. I am curious about Kurutan? Because I don’t know anything about her relationship with the Major and would like to understand that partnership a little more.

I think my favourite scene involves the Jameson robot, cyborg? And I suppose this is one good thing that came from this episode because you can look at the world more closely. I can never imagine deciding to have my consciousness transferred to such a device! However, I think some people would get a kick out of it. I suppose that any fan of this series is curious about the relationship between man and technology. How far would you go? The thought of any robotic prosthetic scares me, so no wonder I’m so enthralled by it. Kusanagi seems to have some hatred for the technology that keeps her alive. Maybe hatred is a strong word, but I enjoy watching that conflict in her character. 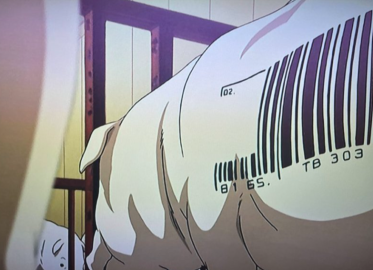 I have to say I love the pigs at the Medetic facility, very Damien Hurst. And as I said earlier, the story didn’t grab me, but I was happy to watch this episode and learn more about the characters and the world they occupy. In life and death, we have very few decisions to make. In this world, however, the decision making is far more complicated, and sometimes, those decisions can last for longer than any lifetime we understand.

Have you watched The Fortunate Ones? If so, please let me know your thoughts in the comments below. If you enjoyed visiting today, please give me a like, share or subscribe for up-and-coming reviews. I’m always eager to reach out to fans of Ghost in the Shell, so if you have something to share, contact me at talesfromtheneonbeach@protonmail.com

Ghost in the Shell Anthology. 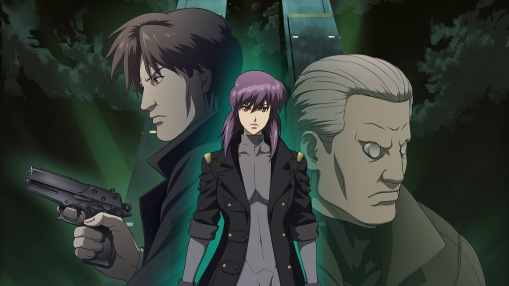