The Matrix Resurrections is days away, so I thought it was time to go back and watch two Animatrix episodes that gave this story some real depth. Morpheus tells Neo that he does not know which side struck first between the machines and the humans? Well, you don’t need to choose a red or blue pill for this story. Just accept it as it is.

It’s the mid-twenty-first century, and humanity is making the best of a new landscape. A.I is introduced to the world, and man never has to worry about working again. Artificial intelligence soon becomes a domestic servant, leaving humanity to fall into vanity and corruption. Still, this new breed of robots are happy to serve their masters.

In 2090, a domestic robot kills its owner and a mechanic, who is sent to deactivate the machine. B1-66ER is arrested and put on trial for his crimes, the first of its kind in history. The robot claims he was acting in self-defence because he did not want to die. The court agrees that machines are not entitled to the same rights as humans and is destroyed. Protests and rioting by the robots and their human sympathizers soon emerge, like the famous Million Machine March. Eventually, the authorities use deadly force against the robots and their human allies.

The government decides to destroy all the robots in case of a rebellion. Why the destruction of the machines occurs a few robots manage to flee, and those that managed to escape help create their very own nation called Zero One. 01 soon begins to build a new society and a productive one. The robots soon produce advanced machinery that brings profit to this frail economy. It isn’t long before humanity begins to suffer, creating a global stock market crash. The United Nations Security Council calls an emergency meeting to help end their urgent situation. Zero One send two ambassadors to find a peaceful resolution and requests admission of their state into the United Nations. Their request is rejected, and the council declare war on the machines.

The United Nations sends its aircraft to drop nuclear bombs on Zero One. Instead of a victory, they find a new type of machine that can live through the radiation and heat dropped on them. The machines now have the upper hand, and when they declare war on humanity, their reaction is far more brutal. As the robots begin to take out each territory, the human leaders seek a final solution. Operation Dark Storm is activated, and with all its thoughtful preparation, scorches the sky, removes the sun and deprives the robots of the solar energy they need to survive. Bit of a setback, but it also causes worldwide famine and the complete collapse of the biosphere.

For a brief moment, the war becomes an even playing field, with humanity having the upper hand for a short while. However, it isn’t long before the machines adapt to their new landscape, almost becoming insect-like while absorbing the environment around them. Losing the battle, the United Nations begins to drop nuclear bombs on their own forces. The machines did suffer some energy shortages after Operation Dark Storm, but after studying human biology, find a new form of electricity. The machines learn how to power their motherships with the bio-electricity of captured soldiers. The war soon becomes a hunt, as the machines take living humans at any cost.

Years pass and mankind is almost at its knees, but the machines have created skyscrapers filled with human prisoners and is thriving. Zero One returns to the United Nations Headquarters to accept the surrender of humanity. However, this representative is not looking for peace and destroys New York and the last of humanity.

“Your flesh is a relic, a mere vessel. Hand over your flesh, and a new world awaits you. We demand it.”

The machines win the war and achieve a world unlike any built by humanity. However, it is humanity that keeps the cities alive. Millions of prisoners, sedated and living in a simulated virtual reality, a reality the machines call the Matrix.

I hope you are still with me? The breakdown of this story was pretty formal and never really speaks about the beauty of these two episodes. I just felt like I wanted to revisit this story and soak up some moments that I forgot, because I’m hoping some of these themes are mentioned in the new film. The Second Rennaissance is based on a story from The Matrix Comic Book Series 1, called Bits and Pieces of Information.

“We have only bits and pieces of inforamtion but what we know for certain is that at some point in the early twenty-first century all of mankind was united in celebration. We marveled at our own maginifcence as we gave birth to A.I.”

I don’t really know much about Mahiro Maeda, but the art for The Count of Monte Cristo looks epic and is definitely on my to watch list. The Wachowskis wrote these two episodes, but I wish they would have explored this story a little bit more in the main trilogy. If anything, the machines get my sympathy. Okay, you could say the story is a little simple, and hopefully, we wouldn’t make the same mistakes, but you never know these days.

The Second Renaissance is probably my favourite story after The Matrix, 99. I’m not saying I can make better decisions than the writers, but imagine if this would have been the second movie? The third film could have explored the relationship between man and machine a lot closer. In the Matrix Revolutions, Neo only went to the Machine City out of necessity and desperation for both sides. The Matrix felt like it never got started in some way or another, and it would be good if it could put that right. I guess I will find out soon enough.

If you haven’t watched The Animatrix, I would definitely recommend it. Will you be going to see the new film? People seem a bit on the fence with the one, and I kind of understand that but I’m staying optimistic. Thank you for visiting today. As always, I would love to hear your thoughts in the comments below. 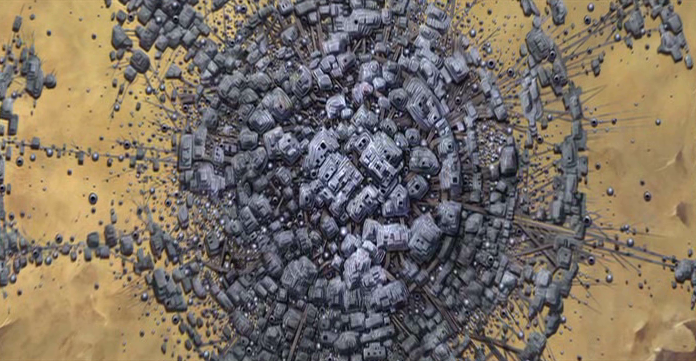