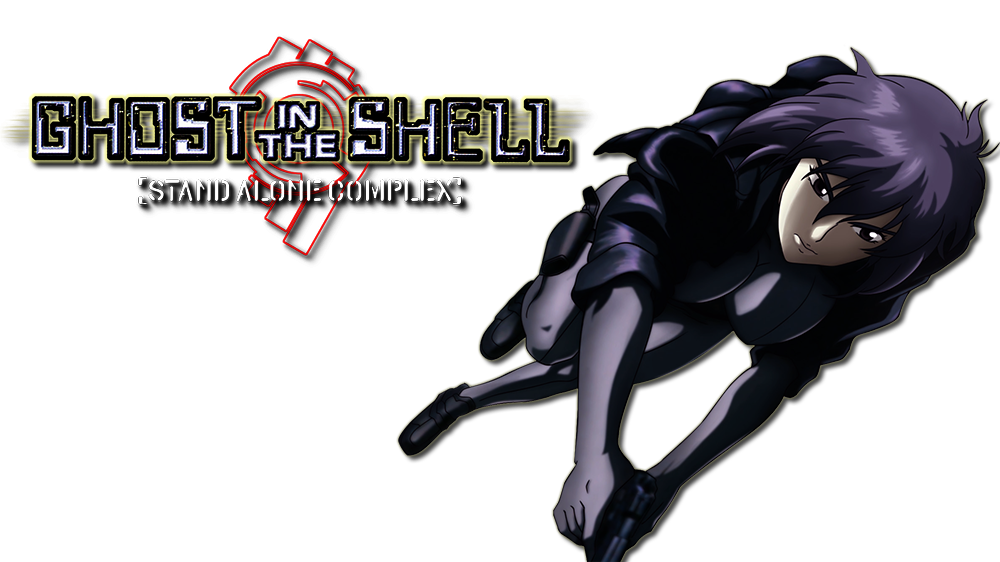 Hello and welcome back to my review of the Ghost in the Shell Stand Alone Complex, one episode at a time. I was a little nervous starting this new project, only because I still feel new to the fandom. I will say though, the response by the fans has been nothing but amazing and supportive. Thank you to those people who commented because it made me smile. In today’s climate, a smile is everything. Before we get started, I want to mention something that stood out to me in this episode, the music. Yôko Kanno is responsible for the score in this series and is now the frontwomen of my new favourite band, The Seatbelts, simply fantastic. It looks like she has had a great career, and I’m looking forward to learning more about Cowboy Bebop as well. Let’s get started with episode two.

The episode starts at the Kenbishi Industries testing facility, as a Tachikomo tank opens fire and escapes the base. The Major briefs the team about the incident, and points out that the multi-ped designer only died a week ago. No terrorist organisation are taking responsibility for the attack, and the military will not get involved till then. So, it is down to Section 9 to stop the runaway tank .

The Major and Batou take a squad of Tachikomo’s, leaving Borma and Saito to wait for her orders. Aramaki and Togusa head to Kenbishi Headquarters to find out why this has happened, and give up any information that can help stop the vehicle. Togusa interviews the multi-ped’s co-designer Toshio Ooba, and after some hard questions, Ooba reveals then hijacker is Takeshi Kago! Ooba was persuaded to help transplant original designers’ brain into the tank after his death. Takeshi suffered many birth defects and his parents denied him any cyber technology, due to their religious beliefs. Ooba believes Takeshi is on his way to avenge his parents for his sufferings in life. 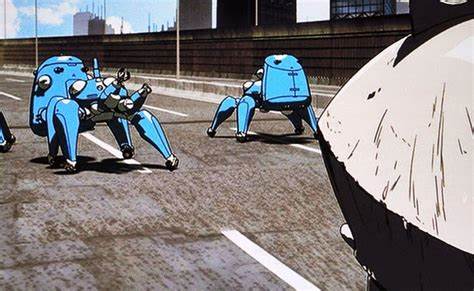 The tank heads into a densely populated area, and Aramaki finally persuades the CEO to hand over the information they need to stop it. The Major realises that she needs to remove the brain core and climbs on to runaway vehicle. To help the Major, super adhesive missiles are fired at the tank, which eventually slow it down. Unfortunately, the multi-ped reaches its destination, as Takeshi’s parents leave their home. Takeshi points the tank’s guns at his parents, giving the Major a chance to hack into the brains core. As the tank shuts down, Takeshi’s life is experienced by the Major.

I have only watched two episodes of this series, but I am so impressed with the beautiful imagery and amazing writing. Togusa is a stand out character for me again. I think it’s interesting how the Major and the team are involved in this crazy road chase and Togusa is just doing simple detective work. I enjoyed the look of the testing facility, the dome looked like something you would see in a blockbuster movie. It’s an animated series, but the standards set by the creators is exceptional. I’m guessing this is a stand-alone episode as we don’t see much happening with the Section 9 team, instead we are given this story about Takeshi Kago. It’s a story of a man, who was simply looking for some recognition from his parents, I think? I guess this one of the main reasons I have enjoyed this franchise, the whole idea of life, death and how technology has blurred the distinction between them both. The great thing about it is, you can’t come up with an answer!

I had to sit on this conclusion for a couple of days. Maybe this is why I started this site in the first place. I want to understand great story-telling and think about how an idea can challenge our perception of reality. Would I let my child suffer if there was a way to end that pain with cyber technology? Probably not, but it makes you think about the implications of that decision. I thought about the series, and the fact I’m only two episodes in! At first, I thought this was just a stand-alone story and held no significance in the series, now I realise it’s a very important episode, and involves a key moment I nearly missed!! I think the writers want you to think about Takeshi’s fate and his parent’s decision. This reminds me of the Major and the decision her parents made for her. The Major had a glimpse of Takeshi’s life and is absorbed by it briefly, does she yearn for a moment like that herself? I also enjoyed how Takeshi realised that his parents did love his life’s work, because they held his model tank in their hands as he faced them. It’s really quite marvellous and I can’t wait for more. I want to binge-watch this entire show, but I think I will get far more out of the series if I carry on watching it, one episode at a time.

Thank you for visiting. Have you watched testation and what do you think about it? I would love to hear your thoughts in the comments below.

Ghost in the Shell. – Who’s more foolish, the fool or the fool who follows him? (talesfromtheneonbeach.com)