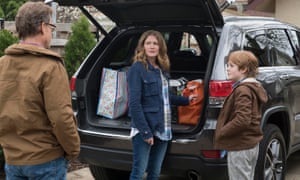 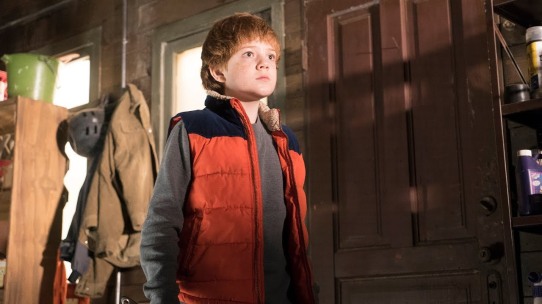 Something great happened when I first started watching this new episode of Electric Dreams, it was the first time I felt that I had finally got everything I expected from this series. Firstly its because it was set in America and it felt authentic and tangible. I suppose some of the familiarity is down to it been set in our current timeline but also the set design and locations used in this episode were beautiful and well crafted together, well because it’s real life, and when that happens, it gives the story so much more gravitas. This episode reminded me of The Wonder Years, Stranger Things and The Twilight Zone and I felt . . . well, pure enjoyment. The visual/special effects are pretty much up there with the rest of the series, fantastic! A big nod to the costume department for Charlie’s Marty Mcfly style body warmer, a very nice touch indeed.  The music is used sparingly but when it is, it’s quite effective and sets the scene perfectly with some atmospheric synthesizer music that took me right back to A Scanner Darkly And finally the rain, I’m from England and I love the rain so much and it looks so impressive on screen.  So, yeah, I’m pretty impressed with the look of this episode, let’s just hope the story holds up.

Loving father Matthew Greg Kinnear and son Charlie Jack Gore are doing everything a father and son should be, enjoying Baseball together and camping in the wilderness as they talk about . . . . . you guessed it, more Baseball. Well, that’s until they notice a meteor shower in the sky and think nothing more about it. On the way back Charlie has a bit of a bizarre encounter with a hunter who will not stop staring him out, like giving him proper evil eyes . . . and its raining, plus he has a dead reindeer in his trunk, but a good hotdog wipes that moment clean away. When the pair return home though you get the feeling that everything isn’t as rosy as first thought as Charlie’s Mother Mireille Enos asks Matthew if he has told him yet?  Which he hasn’t and again more meteors begin to fall from the sky. Next day Charlie goes to school but half of the pupils are missing and the teacher Mr Dick Terry Kinney looks a little spooked and starts talking about the Battle of Hastings in 1066. Back home, Charlie has made the Baseball team and as an added bonus is going to get the shit kicked out him. His father returns home and Charlie can’t wait to tell him the news and runs down to the garage to greet him, unfortunately, his father is busy getting the life sucked out of him with something words just can’t describe! Later things become even more strange as Charlie’s father walks into the house as though nothing has happened but Charlie is having none of it and makes a run for it, and later tells his friend and brother that his father is gone and has been replaced by an alien or something. Unable to avoid capture for long, Charlie is returned home by his father and heads to his room to learn that this is happening all over the country and people are saying their family members are not the same anymore. At school things really take a turn for the worst as Mr Dick throws himself off a school building, not before telling a police officer that his wife has also gone to a place she is unable to return from. Charlie is back at home and finally he can go look in the garage to find out what has happened to his old man, unfortunately,  all he finds is his remains, dumped into a steel bin, well what’s left of him.

You know what’s good for a World Invasion, Baseball! Charlie finally speaks to the alien in his father’s body as they pitch a few balls,  he admits to Charlie that they will be taking his world and there is nothing anyone can do about it. Charlie runs off again and after a series of unfortunate events, he realises the only thing he can do is kill whatever has taken over his dad. Charlie with the help of his friend and brother set up a trap Adam Savage would be proud to be part of, unfortunately, the myth that you can kill someone with a piece of string and a garden fork is busted. Everything must come to an end and Charlie has nowhere else to run as he finally finds himself in the woods alone with his father and a clutch of alien eggs containing one that is ready to replace his mother. That’s until his friends save the day and run over splat his dad, well I feel like I can’t think what else to call him, well now I can as he shows himself in his true form, some kind of space shrimp, and finally, he well and truly gets splattered by a nice big stomp of a shoe. Charlie and his friends grab some petrol and set fire to all the eggs and this is where the war begins, Charlie will never forget the love of his father and will strike war against those who have taken him away, time to get on the internet, spread the word and #RESIST

Sometimes I watch, listen or read something I am going to review and think, “How am I doing write about that?” given the complexity or craziness of the work I’m consuming? luckily enough That Father Thing is not one of those and this episode just felt like a perfect creation of entertainment bliss for me. The biggest plus of the entire episode is the direct hook that leaves you thinking? It’s okay to come and conquer the human race and there will be benefits, but there will also some setbacks. We know how to love and you might not be able to erase that so easily. Charlie by the end is an alien, the only problem is, he doesn’t know it. His love for his father will never die and it can’t be dismissed, it is, in fact so strong that the alien shrimp may have set fire to his own family in those eggs in the name of love, surely if that happens all over the planet, the aliens can never win. I must admit, I was feeling really anxious on the night I first watched it this episode for some reason, luckily enough this was the perfect time to watch it, That uneasiness in my own skin can easily help me appreciate something that simple in life that little bit more, it makes you realise  that there is great humanity in life that we sometimes ignore, something that Philip k. Dick brings out best in his work so magnificently.

If you would like to read any of my previous posts on Philip K.Dick and Electric Dreams, then click on the link below.

Did you watch A Father Thing? What are thoughts about the episode and my conclusion? Let me know in the comments below, I would love to hear your thoughts.