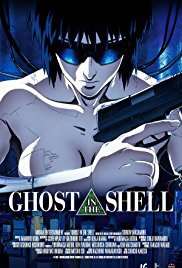 A while ago I reviewed Godzilla: Planet of the Monsters Part 1. I really enjoyed that and it made me want to follow my anime journey a little bit more, and where better to start than Ghost in the Shell; hopefully. Anime or should I call it Manga? I never know what to call it has always been somewhat of a curiosity to me but I never know where to start, but something tells me that this film is a good place to begin.  Released in 1995 and directed by Mamoru Oshii and written by Kazunori. What is very important for me with these reviews is to describe my own feelings and write what I think about the film. I don’t research the story, instead, you get my view of the film whether it be right or wrong. The outcome of this has been really wonderful once I hear comments from other people and my take on the film could be completely wrong but that is the great thing about it. I really enjoy how my first viewing changes after some discussion. Okay, I SHELL begin. (Sorry)

From the opening credits I’m already wondering did the Wachowski sisters steal the number grid from this film, it looks very similar? I really do love the whole cyberpunk look and from the start, this looks beautiful and the animation looks very impressive for 1995. The look of the landscape and the sounds of the city really put me into the film. I am curious as to why the Hollywood remake bombed? I’m only about ten minutes into the film and I really want to watch that version of it now. Furthermore, I want to see how different it is from this; because this is amazing. I really do enjoy watching a female lead character and Kusanagi looks kick ass. Anyway, the dialogue in this film is getting pretty heavy so I’m into this film already, can’t wait to see where it takes me.

So, from the start, we find the Kusanagi and her team trying to track down the Puppet Master who is responsible for hacking into a cyber brain to extract information! I really did enjoy the garbage truck chase and I started having flashbacks of all the great cartoons I used to watch when I was younger, wonderful stuff indeed. I’m starting to think a lot of these characters are cyborgs throughout this chase, as one of the officers is looking through a monitor screen to help see the perpetrator in his thermo-optical camouflage! The chase ends and we find out this guy is not the person we are looking for and his brain has been hacked.

As the film continues, it all gets pretty interesting, when a cybernetic body escapes from Megatech and is run over by a truck. Later it ends up at Section 9 and pleads for political asylum? The one thing I have noticed is there a lot of discussion about life, death and everything involved with it. We find out that there is a ghost in the brain of the cyborg, this starts me thinking that this is something more than man can create? I will need to watch this film a few more times before I totally get it. The cyborg ends up escaping Section 9, and it seems Section 6 who came to see the cyborg are the ones who helped create it? Confusion is kicking in a bit now. Kusanagi tracks down the Puppet Master to an abandoned warehouse and the next fifteen minutes are superb as there is a battle between Kusanagi and a walking tank. There is something quite elegant about this fight as Kusanagi is almost killed after ripping her own arms off trying to enter the tank.

This is a little hard to explain but after connecting with the cyborg, I think Kusanagi merges with the Puppet Master and as they have both become sentient life forms, combined they can learn more? My interpretation of this, is that any life form will always be looking for an answers to their creation, very much like ourselves. I am a daydreamer on my own existence so I like to know to learn about a writer’s interpretation of their existence. After the merge, Kusanagi and the ghost have been transferred to a child’s body, no longer the Major and no longer the Puppet Master; the entity is free to go and the discover the world. please tell me there is a sequel to this because I need to know more? This film was not what I expected, it was actually more and I enjoyed it immensely. I will say I am even more curious about the Hollywood remake and will be watching that very soon. Such a wonderful viewing experience and now I want more.

GHOST IN THE SHELL SERIES.