Geoff Murphy is a director I knew nothing about until I watched and reviewed Freejack in Part 27 of my Journey into Science-Fiction. After success in New Zealand, Murphy went on to Hollywood to direct such movies as Under Siege 2: Dark Territory and Dante’s Peak. However, one of his earlier films, The Quiet Earth, caught my attention and became the film I would be viewing next in my journey. 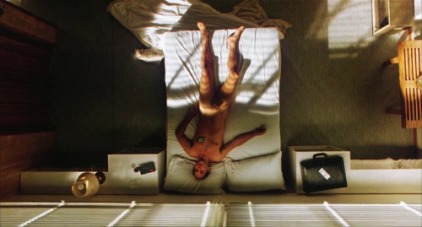 It’s 6:12 am, and Zac Hobson wakes up to a morning, unlike the one before it! No radio signal and a cold silence slowly pull Hobson towards a city that burns amongst the wreckage of a passenger jet, without no visible casualties or any sign of life around. Somehow, every human and animal has disappeared. Could this be down to Project Flashlight that Hobson has taken part in, or is there something far more spiritual at play?

I didn’t know what to make of The Quiet Earth after I watched it for the first time. I was left slightly disappointed, but the second viewing was vastly different and far more satisfying once I understood what it was about. The original poster portrays a film with far more science-fiction elements, but I found it’s more about character study than anything else.

However, there is something unique about finding yourself to be the last man on Earth, and you can lose your imagination in the thoughts of what you would do with so much freedom. One of those things that would never cross my mind is fresh egg yolk with champagne, but now I am curious to try it, thanks to Zac Hobson Bruno Lawrence. Once you finally understand the film, it is a unique viewing experience. The second time I watched the movie, the opening score by John Charles is bursting with life as the sun rises to a new and unexpected day, only adding to the tranquillity of the story that unfolds.

I think the passage of time only adds to the seclusion of this film. Zac Hobson leaves home and finally reaches the desolate town of Hamilton. I believe those streets resemble a much simpler and quieter time in our history that I remember vividly. Independent stores and a feeling of real community life seem to have made way for a global industry and isolation, but that could all be down to rose-tainted glasses in reality! New Zealand is a country I know very little about, but I’m guessing the world seems much smaller now with the advancements in distribution and technology.

So, what does a person do when he becomes the last man on Earth? If you are Zac Hobson, you go a bit crazy, walk around in a women’s dress, look for God in the local church, and finally hold an effigy of Jesus as ransom. A powerful scene and I can see why Bruno Lawrence was one of New Zealand’s finest actors. You can already understand that Zac was having some of these issues in his personal life before everyone suddenly disappeared.

It isn’t long before Zac Hobson reaches a complete breakdown, reaching his lowest moment of despair, finally repenting for his sins to his cardboard followers in the garden. True to life, when you hit rock bottom, it is only then you will find some clarity and start to see things from a new perspective. l can appreciate how Zac’s character development explores this theme as he accepts a more meaningful purpose in life and changes his situation. Until he finds out he is not alone, finding Joanne Alison Routledge.

Today, it’s easy to find familiar storylines of this scenario in the current climate of television shows and movies. The Walking Dead, The Last Man on Earth and I am Legend by Richard Matheson. However, the main narrative that holds all these stories together is our relationships with other human beings, the good, the bad and the ugly. However, The Quiet Earth does this in such a unique way that your perspective on life will determine your conclusion on certain relationships as they develop.

For a brief moment, Zac finally has everything he always wanted, the love of another woman, or so it seems to me. Joanne appears nice enough, but you can sense that she has her faults that she needs to deal with and work out. Overall, she is willing to help Zac work out why everyone has disappeared, which he thinks has something to do with the project he worked on with the American Government.

Finally, Zac has his dream shattered by the arrival of another person on this desolate planet, Api, Pete Smith. I thought I had this review all worked out, but I have realised I need to change it somewhat. I have notes on Api as a character, and to be honest, I do not like him. However, there is no meaning to my conclusion about him. If I were to criticise this film in any way, I would say that we do not get enough about each of the character’s backgrounds to make a conclusive judgment about them. Actually, that could be the very point of the film as well. I genuinely think my dislike of Api is because he goes jogging in leather trousers and has the strangest moustache. Maybe that shows you more about me as a person! Okay, and the fact that his best friend tried to drown him after Api had an affair with his wife, who then committed suicide. I guess it’s easy to look at the world as right and wrong, but it is far more complicated than that. As for Joanne, I think her back story is even vaguer, and it did ruin the film a little bit for me because I don’t know why she ends up with Api? Does she loves him, or is it because they are both a bit lost in limbo still? However, I could watch it again and notice something completely different about their eventual relationship.

I wrote a decent conclusion to this film, but it was just connecting all the dots and pointing out glaringly obvious clues. This story is about Zac Hobson accepting everything that has happened to him and accepting it was not always his fault. Experiences can change the person we become, and sometimes we think this is our own doing, but it also comes from the reactions of those around us. I believe the moral of the film is Zac accepting himself for who he is and letting go of the guilt he has been carrying around all this time. Metaphorically, The Quiet Earth is him finally destroying those images of himself and becoming a free man, once and for all.

As much as I enjoy futuristic landscapes and talking robots, I also appreciate it when this genre opens up questions about humanity and how we interact. The visuals in this film are breathtaking, and there is a fantastic scene where an aeroplane has crash landed into a building which looked pretty realistic for that time in filmmaking. The set design inside the Laboratory was pretty impressive, and some camera images are iconic for me now. New Zealand is a beautiful background for the story and gives the film a fascinating claustrophobic feeling. I will be reading the novel by Craig Harrison this year, and I will be reviewing that at some point. I think the character development in the film is beyond brilliant. The complexities are subtle, and the reactions are effective. It is truly the only reason I started this journey. Simply to find films and books I have never encountered before, and it’s gratifying. 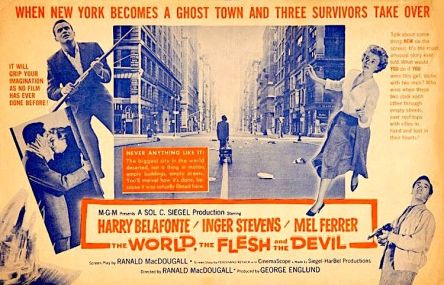 I guess this finally decides where I will be visiting next on my Journey into Science-Fiction. Unfortunately, there weren’t that many options, and the film to watch next is The World, The Flesh and the Devil, 1959, on which The Quiet Earth was called an unofficial remake. However, judging by some of the critic’s responses to that film, I could be opening a can of worms. Anyway, thank you for visiting today. Also, have you watched The Quiet Earth before? I would be curious to hear some of your comments below.