Sputnik is a film I knew very little about before watching it. Okay, I guess the title is a bit of a giveaway but I hadn’t watched any trailers or read any reviews. It was just the simplicity of the poster above that made me believe this film was worth watching, and when that happens, I’m usually right. Sputnik was released in 2020 and is the first feature-length film from Director Egor Abramenko. Filming was located in Moscow and most of the film’s scenes were shot at the Shemyakin-Ovchinnikov Institute of Bioorganic Chemistry. 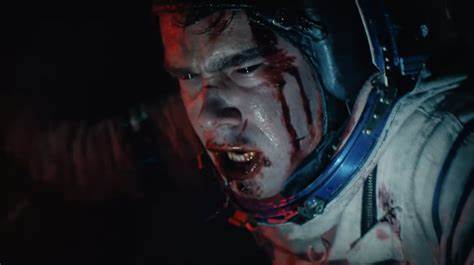 It’s 1983, and the World is still in the grasp of the Cold War. Above Earth, two cosmonauts are waiting to return home from an orbital research mission. Preparing for re-entry, the cosmonauts become fearful as a strange object appears outside the ship and damages it, leaving them to crash land on terra firma. Only one of the crew members survives, and he seems to be sick or infected. Dr Tatyana Klimova is a neurophysiologist who will do whatever is needed to help her patients. Colonel Semiradov believes she can help the surviving cosmonaut during his quarantine. It’s not long before Tatyana learns the truth, that the survivor has an extra-terrestrial organism living inside of him.

One of the first things I noticed about this film was the high quality of the production design. It felt pretty similar to The Vast of Night, a film I enjoyed as well. The filming locations are pretty limited but the colours and textures used on set, definitely raised the films visual appeal for me. It all looks cold and uninviting, and the only warmth is given by Tatyana.

So, the film looked great but did the special and visual effect hold up? Perfectly, in my opinion. The imagery in this film is just beautiful. I’m in awe that everyone involved in the film’s production is at the top of their game. I mean, look at the detail on the cosmonaut’s suit above. The attention to detail is precise, and you can see how the helmet has gone from a piece of life-saving equipment to a life-threatening hazard. Also, the craft that went into making the suit is jaw-dropping. I have spent quite a lot of time looking at all the little details, including the ribbons, clips and cables that make it look like a real piece of equipment. I know the picture is pretty gory, but there is something beautifully mesmerising about it as well.

The creature looked pretty much perfect and sometimes CGI can take you out of the film for a moment, but this did not. To create an extra-terrestrial, that is both terrifying and cute is quite impressive. Its fluidity and movements are pretty realistic as far as CGI goes. Can you pick a full computer-animated creature that looks this good? I can’t as it’s skin texture and muscle tone make it one of the best aliens on-screen since 1979.

This film has subtitles, but I didn’t think about that for a second. The simple reason for that is because the script is solid. A bold statement but one I will stand by. I Have only watched the film once, so my observations may be brief. The characters in this film have a real sense of depth and purpose. Konstantin Pyotr Fyodorov is a cosmonaut who is sprinkled with a sense of sadness and regret. I’m not sure, but it’s like the creature chose him for that reason! Colonel Semiradov Fedor Bondarchuk is a man whose strong with his decisions and who will try to complete his mission, whatever the cost.

Finally, the star of the show, Tatyana Klimova Oksana Akinshina. I found her character to be a tough one to understand at first. This is not a complaint, it’s a recognition of brilliance. Tatyana comes across as a woman who is very devoted to her career, resulting in the Colonel recruiting her. I don’t want to give away all of the plot in detail. I would rather you go watch it and see if you agree or disagree with opinions or not! However, there are strong themes of fear and symbiotic relationships, and I think this is what helps elevate Tatyana’s character to another level. It isn’t the career that drives her, it’s her fearless approach to doing what is right. It’s about understanding, that we all share some kind of symbiotic relationship with others in our life, whether we have met them or not. It’s Tatyana’s relationship with Konstantin’s son that completes the film to perfection. Such a wonderful performance. I know there is a lot more meaning to this film but after the first viewing, it felt pretty insular, and I loved that. Make no mistake though, I will be going back for more.

I’m impressed with Vodorod and I expect big things from this production company in the future. Turns out, I don’t even need to wait that long! I have just visited their website and come across this beauty of a trailer above. I think Hollywood needs to be looking at these people, because they know how to get it right. It’s quite simply, science-fiction at its finest.

Thank you for reading. Have you watched Sputnik or plan to watch it in the future? I would be interested to hear your thoughts in the comments below.