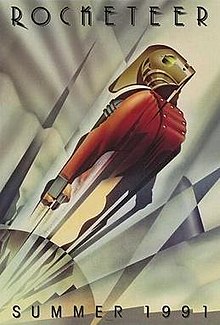 If anyone read my last review on Commando Cody and the Radar Men from the Moon you will know this is part of my journey into science fiction. Basically, I started my journey with the last review I wrote and by the end of the blog, I picked one connection to that topic. This brought me to The Rocketeer. The Rocketeer was inspired by Commando Cody and other black and white serials from the 1940s. I’m glad I came up with this Idea to delve into science fiction because I had already watched this film. I would have never decided to revisit it; furthermore, where will this lead me next?

When I think of Disney now all I can see is the huge umbrella of blockbuster companies that they own. The Rocketeer released by Disney in 1991 reminded me of a time when they just seemed to be involved in making very nice family films and cartoons. Don’t get me wrong because everything they did release was always of the highest quality and if they can stick to that ethos now and in the future, well you can’t see them failing in anything soon.

As soon as this film starts I am already taken back to Commando Cody as we see our hero, Cliff Secord Billy Campbell getting ready to take to the skies on a trial flight with a plane that he and his buddies have helped build. Once in the sky, this is where the 1940s nostalgia really kicks in with a good old-fashioned car chase and shootout. This results in our hero’s plane being shot by accident leaving him ready to crash land. Why are the feds chasing these criminals? Apparently, they are looking for a top-secret item which gets left in the airport only to be found, yes you guessed it, the jetpack. The story is pretty easy to follow after this and won’t leave you at home scratching your head for weeks after but it is charming. I can’t work out what makes this film so charming though? is it the fact that in 1991 films seemed a lot more basic and a little less chaotic or is that 1940s storytelling that is very simple in its approach. I can’t personally speak for the 1940s but films today seem to be very heavy in detail on the screen and deep in dialogue and I really miss this type of filmmaking. However; before I start baking cookies and attending Church in the morning the plot starts to get a little darker with a murder. Jennifer Connelly as Jenny Blake is very easy to like in this film and she stars in Labyrinth so she gets a pass. Timothy Dalton as the villain made me remember just how good of an actor he is. By the end of the film, we end in a spectacular fashion including more feds and more gangsters, more shootouts and even the Germans make an appearance. Let’s talk about that helmet though. Maybe I am old fashioned but this beats anything that has been released since Iron Man, It’s pure 1940s art deco loveliness. I did notice a few easter eggs in the film what brought a smile to my face. I really enjoyed this film but never loved it. Basically, I was just left wondering why his pants never caught fire? yes, I am that simple. 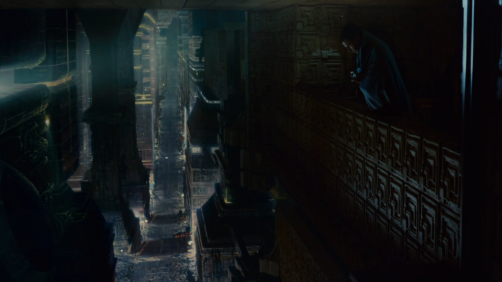 So, what will I be looking at next that has a link to the Rocketeer? Well, there was the Soundtrack what I thought was amazing composed by James Horner so I could have chosen something from him. Also, Billy Campbell starred in an episode of The Next Generation called The Outrageous Okona. The actual winner is Blade Runner and why? Because of Ennis House in California designed by Frank Lloyd Wright. When I was watching this film I looked at some of the tiles on the walls of the house and it reminded me of Deckard’s house in the Blade Runner film and after doing a bit of researching (Google) I noticed it was the same house and it has been used in numerous films over the years as well, the building is beautiful and the history is intriguing. If it’s tickled your interest a bit then I would definitely go read about it because it is very interesting and could be a blog all on its own. Well it’s been emotional people and I am in the mood for a good shootout but will probably just end up ironing the curtains or something, so till next time.

Do you have any great memories of The Rocketeer or anything discussed in my blog today? Then please leave me a comment below, thanks.