Welcome to My Journey into Science-Fiction Part 22. If you would like to learn more about my journey and how it started with Radar Men from the Moon and brings me here today, click on the link below.

My Journey into Science-Fiction Archives. – Who’s more foolish, the fool or the fool who follows him? (talesfromtheneonbeach.com)

The War of the Worlds, directed by Byron Haskin and produced by George Pal, is a film that is loosely based on the H.G. Wells novel of the same name. Paramount Pictures released the film on August 13th 1953, and it was a box office and critical success for the studio.

A meteorite crash lands in the small town of Linda Rosa. Dr Clayton Forrester and the locals examine the site, and they soon realise they might have visitors. The small town and its residents wait patiently to find out if their guests are friendly; or not.

This film was my first introduction to the War of the Worlds. I can’t remember exactly when I first watched it, but it was at a very early age. I am aware of the original novel, Jeff Wayne’s album and Steven Spielberg’s recent blockbuster. Not forgetting the radio play by Orson Welles. However, this journey is starting to highlight, just how little I know about this classic science-fiction novel, and its history.

I have only watched The Sky is Falling – The Making of The War of the Worlds and read the Wikipedia page in preparation for this review. That is all I need; they both tell you some great anecdotes and acknowledge the people who helped make this film a success. I think it is pretty funny that George Pal tried to strangle a Paramount Executive who said his script nearly ended up in the waste paper basket. Truthfully, I think the main reason I have decided to revisit this movie is only to find out why it still seems somewhat wondrous to me all these years later.

I love the nostalgia of watching an old technicolour film, and even more so when it’s filmed on Stage 18 at Paramount Studios. In reality, I didn’t feel any connection to the opening of The War of the Worlds, and it pains me a bit. Going back to when I first watched it, I barely recognise those scenes at all. Another thing that caught me off guard was the opening credits. I never realised this is supposed to be a war film. Surely, it’s just an invasion, and there is nothing anyone can do about it. And finally, the title of the film. I remember this old war font, and it seemed to be everywhere, back in t’day. It just has a very weird vibe for me, and I cannot explain it. Maybe it’s because it was used for a cheap brand of foods in a popular English supermarket.

This film does have some unforgettable cinematic moments, and regardless of my opinions above, I would say it is the first modern blockbuster that I remember watching. Modern, as in the advancements in cinema that happened in the late ’70s and early 1980s. The Martain war machines designed by Al Nozaki are captivating, even today. The Cobra Head design and copper body make these machines both terrifying and beautiful at the same time. A couple of other names that are worth mentioning are make-up artist Charles Gemora and daughter Diana. Both father and daughter had to spend an entire evening reconstructing the Martian puppet, so it was ready for filming the next day. 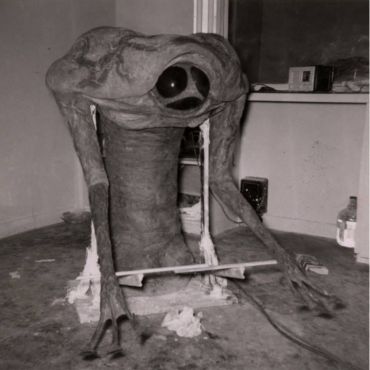 Something rather revealing is happening as I write this? It’s hard to get motivated, as it is all a bit of hit and miss, pretty much like my viewing of the film. In all honesty, there maybe ten to fifteen minutes of this film that I truly adore and the rest doesn’t resonate with me. It just seems like a film that is a product of its time, but also has a creative team that could see where the industry was going next. I would like to mention one scene that impressed me, and that is when Dr Clayton Forrester Gene Barry is walking through a desolate Los Angeles. It’s such an interesting and visually spectacular moment, and I wonder if Danny Boyle thought about it when filming 28 days later?

I will always love this film as it felt like my first step into the world of science-fiction, but I have a feeling there will be a lot more depth to the original novel, which I can’t wait to start. I’m actually a little shocked by my reaction to this film as I was sure I would enjoy it, but here we are. Have my tastes changed, or am I simply not in the mood for it? I know that I have at least ten favourite bands, and each one comes back into my life at the correct time. I guess I will have to to wait till the next time the film crosses my path again to find out. Anyway, I have stared at the review for the last two weeks, and it is time to move on.

I guess I will have to choose where I go in My Journey into Science-Fiction Part: 23. Well, I’m going to pick something that will be pretty fun, I hope! Les Tremayne played Major General Mann in War of the Worlds. He also voiced the part of Arthur in the animated film, Starchaser: The Legend of Orin, 1985. I have just watched the trailer below, and it looks vaguely familiar, so I will be watching this next and can’t wait to get started.

All photos are property of Paramount Pictures.

Thank you for visiting. What was your first introduction the the War of the Worlds? I would love to hear from you in the comments below. Please subscribe if you would like to read more of my posts in the future.