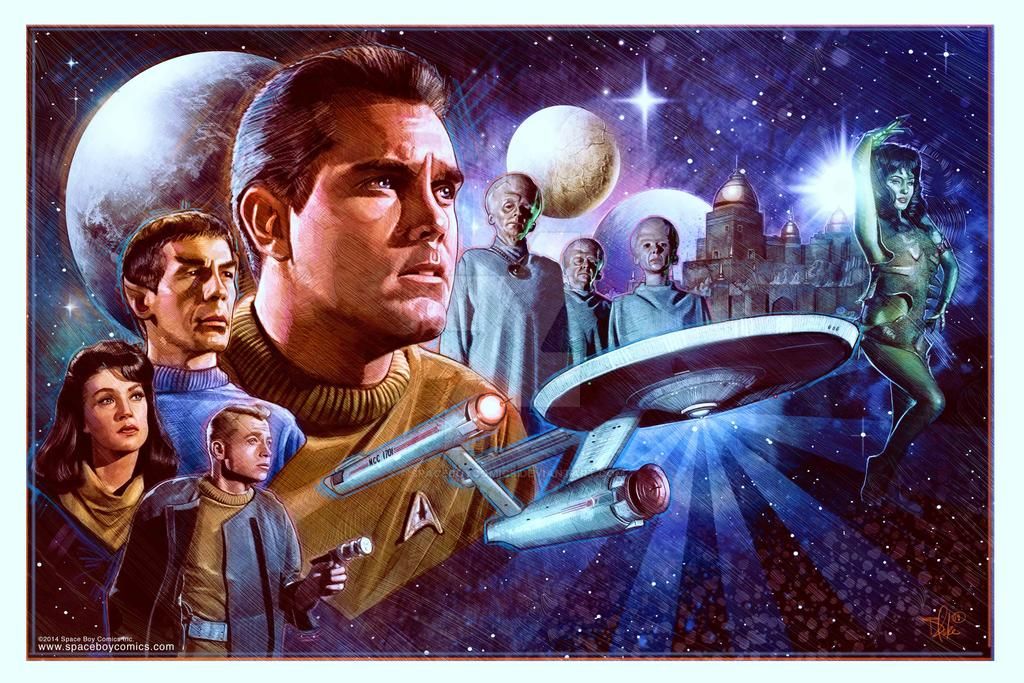 Introduction to the Star Trek and Star Wars Timeline.

Well I guess this where it all begins, in November 1964 at Desilu Productions.  In the US charts, we had Leader of the Pack by The Shangri-Las and in the UK charts, it was Baby Love by The Supremes and what a brilliant song that is. Lyndon B. Johnson was the President of the United States and Harold Winston was the Prime Minister in the UK. Father Goose was one of the most viewed movies of the year and Ian Flemings’s You Only Live Twice was one of the best-selling books. The Cage was rejected by NBC but they ordered another pilot episode that would become “Where No Man Has Gone Before” and thankfully the rest is history.

The USS Enterprise receives a distress call from the fourth planet in the Talos Star Group whilst exploring deep space. Captain Pike assembles an away team to beam down to the planet to look for survivors. Amongst the survivors is a beautiful young woman called Vina who lures Pike away from the group. The call for help is a trap and an alien race called the Talosians kidnap Pike, leaving his crew with no way to help him. The Talosians want to use the Captain Pike and Vina to repopulate their ravaged planet and they have their own unique ways of persuading him.

Just a warning, I’m not reviewing the full story but just talking about some moments that caught my attention. It’s over 50 years old and I’m hoping most people would have watched it by now. However, I really enjoyed watching this episode and the story was quite unique for a pilot. Something I have noticed as we live through this pandemic in 2020 is that I have never really thought about the consequences of Star Trek properly before. I’ve always enjoyed my Star Trek and then gone back to my simple life with ease. When you actually think about the implications for Pike though, it’s pretty dark. Captain Pike Jeffrey Hunter is in charge of the Starship Enterprise and unable to take comfort in his current role after suffering some specific traumas in the past. Okay, he is locked up in a cage when the Tolosians kidnap him but he is now living in a world where he can be anything he wants to be, it must have been tempting! Anyway, I think I would probably just stay so I could look at the birdman in the cage next to him, that whole scene reminded me of David Lynch film, so bizarre. 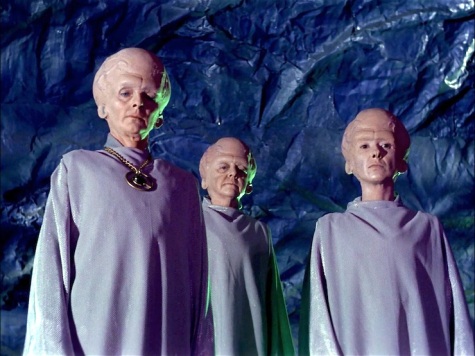 I guess I should really talk about the Talosians. My brain still struggles to understand that there are female actors inside that makeup and male actors provided the voice, it’s mind-bending. You really can’t get any more iconic than this alien race and they could easily have ended up on the shelf and I’m glad Gene Roddenberry managed to use them in The Menagerie. Things eventually go wrong for the Talosians after they manage to access Enterprise’s database and learn about the human reaction to been held in captivity, finally deciding to let Captain Pike leave. What is surprising is that Captain Pike never tried to free any of the other prisoners that have been held captive? And even more frustrating is why the Captain didn’t tell Vina Susan Oliver that the Doctor could probably heal most of her injuries onboard the Enterprise? It could have been at least an option for her? 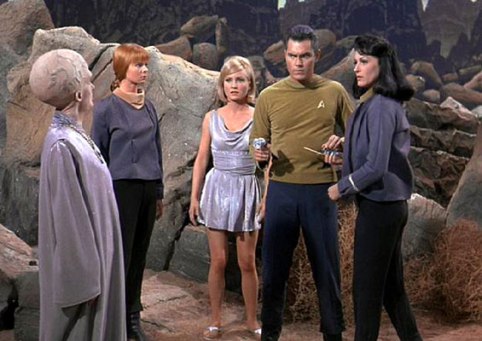 Aboard the Enterprise, you can obviously see where Gene Rodenberry needed to make changes. One scene seemed to last for forever as sound effects played constantly and the actors just played with their knobs and made eye contact with each other. To be fair, it also made me laugh so I can’t complain. Apart from that, I thought the sets looked pretty fantastic for a pilot episode. Some props that caught my attention was Christopher Pike’s huge clipboard and it looked terrible but I thought the communicators and blasters looked perfect.

I was thinking about the casting and I was wondering if these actors felt awkward to me because I knew what was coming in season one or was it just bad acting? I’m not so sure to be honest, because they all did a pretty professional job but lacked any charisma in my opinion. The actor who made the biggest impression on me was John Hoyt as Dr Phillip Boyce and I can see that DeForest Kelley added some of his mannerisms to his portrayal of Bones. I’m happy with the cast we finally end up with but Dr Philip Boyce is a character I wish I could have watched evolve over a few seasons.

I think it’s great that Gene Roddenbery added a woman to the bridge but he drops a few points because it’s his real-life partner, Majel Barrett. Even with Number one on the bridge, there was still a chauvinistic atmosphere on board! Captain Pike says he still can’t get used women on the bridge but Number One is different because she is intellectual but I don’t really think it works like that? I’m not blaming anyone and I guess that’s what life was like in those days but that’s easy for me to say as it wasn’t me who was treated differently. So that leaves Spock and I’m so happy Leonard Nimoy knew exactly what changes the character needed to make Spock his own. In this episode, he seemed to be shouting a lot and not using much logic, which is a long way from the character we know and love. 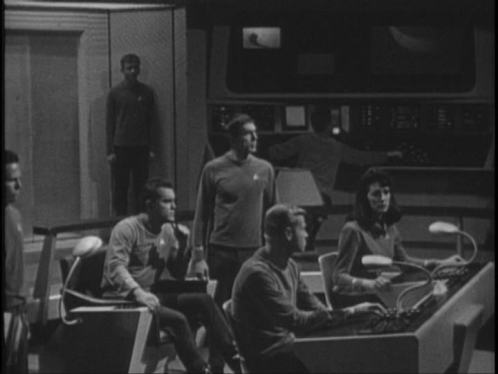 I have watched some early black and white footage of The Cage and comparing it to the one I watched on Netflix in glorious high-definition is nothing short of amazing. The restoration of the episode is out of this world. There is something peculiarly wonderful about the look and feel of 1960’s Star Trek and it’s hard to put my finger on it but I think it’s because it’s so easy to get lost in that world. I know it’s filmed on a sound stage; the background is a matte painting and rocks are made from polystyrene but if you have a really good imagination, it’s all you really need.

I think this is just a perfect moment in Star Trek history and what looked like an amazing time in Hollywood. I think if I had the chance to make a film about Star Trek, it would be a biopic about this pilot. Imagine going behind the scenes and watching it all come together and the struggle to keep the show alive. By all accounts, it was far from easy for a lot of people involved in the production. I have had this book in my collection for quite a while and would highly recommend it if you would like to learn more.

And on Youtube, there is also an audiobook by Herbert Solow and Robert Justman which is really insightful and quite funny.

Anyway, this was just what I needed. This episode has somehow help me forget about some real-life issues and step back in time for a while. Next time I will be looking at season one of Star Trek The Original Series and I can’t wait to get started.

Have you watched The Cage and what do you think about it? I would like to hear your comments about it. Thanks for visiting and take care. 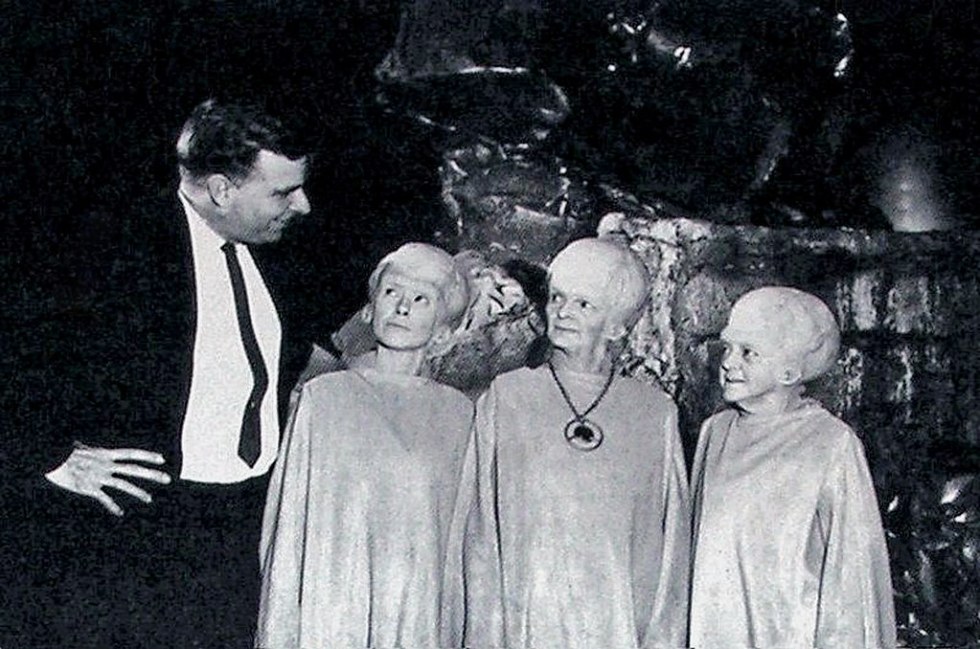