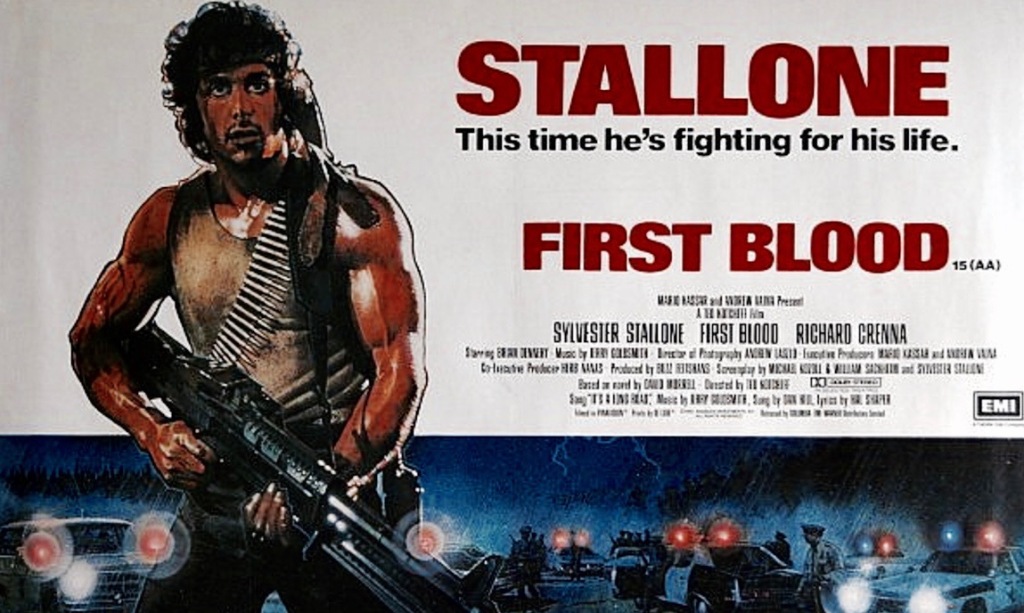 After watching and reviewing Das Boot a few weeks ago it got me thinking about iconic films from the past. Das Boot is an iconic film which I am glad I finally got round to watching it. That’s when I decided to look at the films that I should be watching and those that have made an impact on me in the past. simply calling them iconic films on my blog makes it pretty simple but effective for me and gives me a place to keep them all together on my homepage. So yeah, welcome to iconic films. 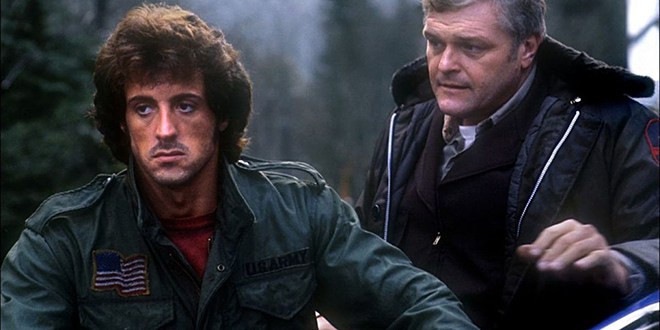 The first film I really started to think about was First Blood as I like to think of it but it also has the name of Rambo Part 1 also. Well, let’s get the basics out of the way. First Blood was released in 1982, directed by Ted Kotcheff and co-written by Sylvester Stallone. What I didn’t know is that it is in fact based on a novel by the same name by David Morrell in 1972. Instead of reviewing the films, I thought it would be better to look at why I think they work or not in some cases. Here is a short description of the film’s plot. Vietnam veteran John Rambo is searching for a soldier buddy from the war in a small Washington Town. Just after learning his friend had passed away Rambo is also picked up by the local Sheriff, Will Teasle and is basically treated like a criminal and then arrested when he refuses to comply with the Sheriff’s advice. Once in the Police Headquarters, Rambo again is subjected to more humiliation and starts to suffer from flashbacks from the Vietnam War where he is shown to be tortured by the enemy. This results in Rambo attacking the Police and fleeing the department, heading into the mountains. The Police are unable to track Rambo and call in the National Guard and his former Commander, Colonel Sam Trautman to help bring Rambo out from the wild; later it becomes apparent the Colonel is there to save the people in the town from what is essentially a trained killing machine. Now if you don’t know the ending, it would be advised to go see it for yourself because it’s much more beautiful than I could ever put into words. I will discuss three reasons why I think this film has become iconic. I think that’s pretty simple enough and gets to the basic thoughts in my mind, which is the most important thing really. 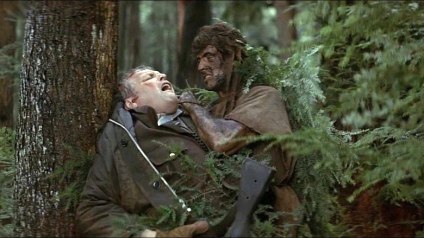 The film was shot in British Columbia, Canada in the winter of 1981 of and the town scenes was shot in nearby Hope and Othello Tunnels. Golden Ears Provincial Park and Pitt Lake also feature in the film.  In 1982 the world seemed pretty small to me as I was pretty small myself but this film transported me to a whole new world. I don’t think anything has looked as beautiful on film ever since and its a film I really do enjoy to watch just for the look of the scenery alone. Not only that, it looks like a place that anyone could visit and that’s what I think the appeal of the film is. It’s a beautiful location and never a war zone and somehow the beauty of the place also becomes the enemy itself, it really makes you think about what could happen in such a tranquil area. This also makes me think about the popularity of shows like Bear Grylls, In the wild, I can’t help but think this franchise has helped the average sofa hugger become more interested in surviving the great outdoors. They really hit the sweet spot when they used this location for the film. 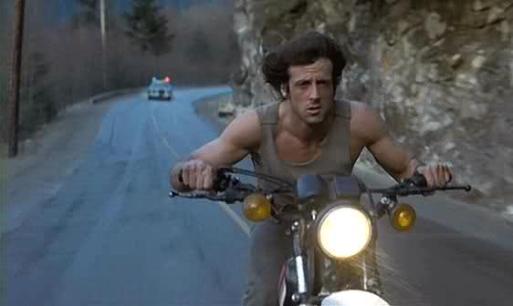 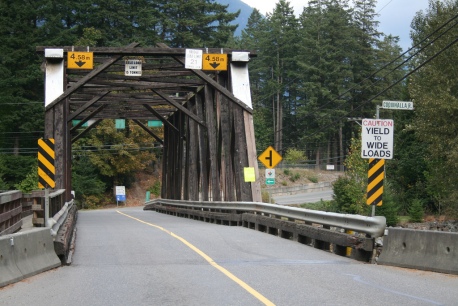 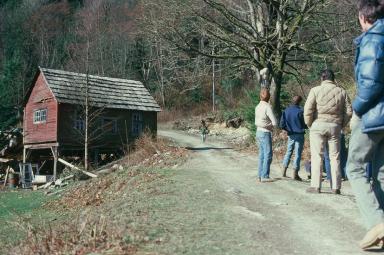 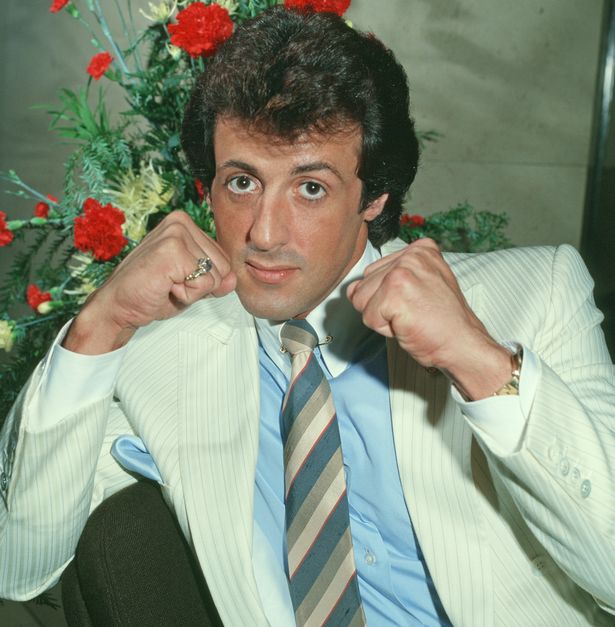 This man has certainly made an impact on film in the last 40 years or so. I must admit that I have never really watched many of his movies in the last 15-20 years but in the 80’s and 90’s I could not get enough of him. I really don’t seem to watch those types of films anymore but I’m now thinking I should at least give them a try! I can’t imagine there are many people on Earth who doesn’t like a least one of his films. After Rocky And Rambo, First Blood became huge hits the world was really his for the taking.  I think It’s this role which really impressed me the most though throughout his career. He played the part so well that I find it really hard to understand when people criticise his acting. It’s not Shakespeare but it’s still pretty sensitive material and he does look slightly crazy in the role? Okay, it all went a bit gun crazy on a later date but I really believed in his character in the film, because he made him feel somewhat believable. I don’t know, maybe its the nostalgia kicking in but I thought he was excellent in this film. 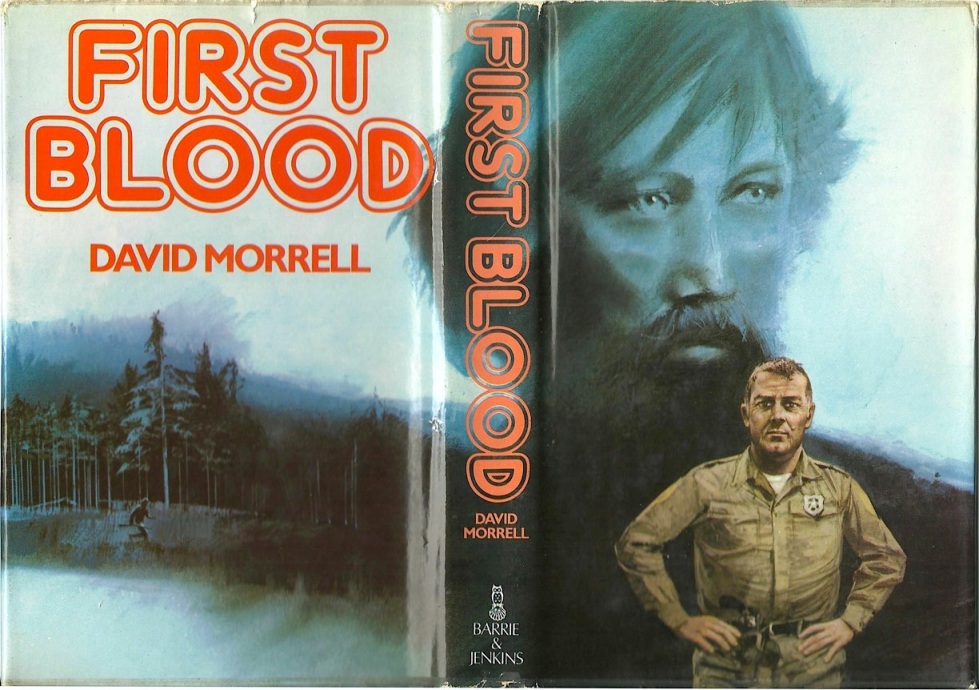 This first part of the Rambo franchise is something I think everyone can relate too, right? Yeah, I know it’s also about a soldier who has suffered from some very disturbing situations in his life but I think it can remind people of certain hardships they have had to face. Rambo in First Blood has become that man that we always wish we could be at some point in our lives when quite simply, you have had enough. We have all suffered some hardships that have caused hurt, either to our families or ourselves and wouldn’t we just love to just say NO! enough is enough and I ain’t taking this shit anymore (pardon my french). I’m not saying go and start a war with a Sheriff’s Department and take on a whole town. I just mean standing up for what’s right regardless of what happens to us in life. Unfortunately, this isn’t always the case and people across all walks of life still suffer daily and a film like this kind of makes you believe there could be some justice in the world If enough everyday people take a stand. This story is still as relevant today as is was in 1982 maybe more so today. The reality of a Rambo is a little less likely in real-life as those kinds of situations always seem to end with the victim never getting any real justice but this gives me a bit of hope and it’s a philosophy I still try to follow today. As much as I did enjoy the later films they could never live up to uniqueness of this story and that for me is why it is iconic. It stands alone, not just in the franchise but as a film on its own. I really do think this is one of the best films ever made and was happy to go back to revisit it. I remember watching this film in the 80s and packing a bag with some marmalade sandwiches to go and live in the wild for a while. I only lasted about 2 hours! But I still remember that sense of freedom today and this weekend I will pack my back once again and maybe make it to 8 hours this time, I love this film and give it 10/10.

Okay, so what did you think about First Blood? Do my reasons make sense to you or do you think something completely different? That is the beauty of life, as people have completely different ways of looking at things. Please let me know what you think of this film below as I love to read the comments. Next time will be a film that I have never watched before, One Flew Over The Cuckoo’s Nest. See you next time for more iconic films.