There is something wonderful to me about black and white science-fiction films and The Day the Earth Stood Still is no exception. Released by 20th Century Fox, written by Edmund H North, directed by Robert Wise and produced by Julian Blaustein, the film was inspired by a 1940s short story called Farewell to the Master by Harry Bates. So why am I talking about this film, well it’s all part of my journey into science-fiction? I simply started with Commando Cody on my first review and it has led me up to part 5. If you would like to know how then please follow the link below. 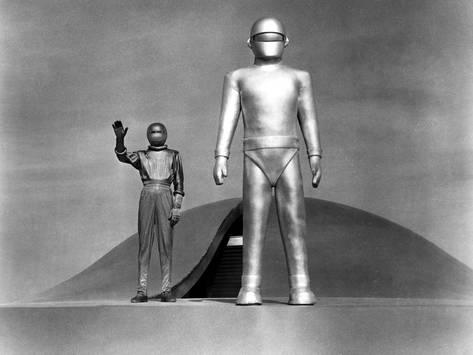 Anyway, its actually been quite a busy few weeks and I have been looking forward to getting some time to myself and talking about this film, Theremin’s at the ready and away we go.

As I was saying earlier, this a wonderful science-fiction. Right from the start have a look at the galaxy with some rich Theremin sounds provided by Bernard Hermann. Hermann worked on some incredible films and TV shows throughout his career from The Twilight Zone, leading up to his last film which was Taxi Driver in 1976. So, as we head into the story we are introduced to the fact that there is an unidentified flying object in the Earth’s atmosphere. This is really the set standard to introduce to the world to this message as we are shown different nationalities talking about the UFO, I can’t speak for any other country but I can assure not all English people sound like that.  That’s why I love watching these films though as it gives you a sense of just how small or huge the world really felt to people back then, to be honest as I watched the ship flying through Washington I couldn’t help notice just how relaxed people looked, no phones in their hands, just simply enjoying their day.

The premise of the story is simple as a humanoid alien visitor called Klaatu has come to Earth to deliver an important message, okay he has an eight-foot-tall Robot called Gort accompanying him but we all need a travel buddy, right? Klaatu also comes bearing a gift and when he tries to share that gift with the world, well someone shoots him, it kind of reminds me of the current climate we live in also. Not only that they have now upset his friend Gort as he vaporizes all the weapons the army has, I wish I had a friend like Gort. Klaatu does get to meet the Defense Secretary in the local Hospital and manages to tell him about the message he wants to share but is simply told that the current climate could not bring all the world leaders together, instead of receiving any help at all, Klaatu is locked up in his room and never to be seen again . . . .  Only joking. Next up, people afraid of things they don’t understand montage as various people slam all their doors and lock up their children for fear of the unknown. Klaatu wanting to learn more about the human race decides the best place see to see this would be at a local boarding house, to be fair to him, I like to stay in hostels for exactly the same reason when I travel as you get to know people a whole lot better.

The breakfast scene in the boarding house is a really important part of this film and is quite important in my eyes as it helps you get a taste of people’s different points of view about our alien visitors. I guess nothing has changed with society as most people at the table are ready to not trust and even attack this threat before knowing the truth first. It’s also a reminder of how much our current way of life has changed as we have people smoking at the table and listening to the radio for the news instead of social media, I really do love the voice on the radio talking about destroying the ship at Lincoln Memorial.

I would like to discuss the most important part of this story to me personally and that is the role of Bobby and his mother Helen, without quoting Yoda I will say there is a lot to say about a child’s mind that is a lot more trusting and understanding than an adult. Bobby takes Klaatu on a tour of the American dream and visits his father’s grave who was killed in military action. I think Klaatu learns a lot from young Bobby about life on Earth and this is why his Mother also ends up trusting him also. When Bobby follows Klaatu back to his ship and watches as Gort renders two soldier’s unconscious, Bobby then tells his Mother. I think that Klaatu through his friendship with Bobby knows he could trust Helen and later explains the truth to her.

There are elements in this story that I haven’t discussed but I wanted to highlight the two positive aspects of this story in Bobby and Helen. One of those elements is another side-story including Helen’s boyfriend alerting the government to that fact that Klaatu is the alien they are looking for. When Helen learns the truth Klaatu also makes her remember some important words to say to Gort incase anything were to happen to him again. “Klaatu barada nikto”. It was a good thing he mentioned those words as Klaatu is shot again and killed this time. Helen goes to Gort and speaks those words and then Gort goes and finds his friend and brings him back to life. The thing what really hurt about this is that the Klaatu’s revival is only temporary, I guess they did kill what they couldn’t understand.

So Klaatu finally gives his speech and instead of trying to explain what he said I will simply show you his words.  “I am leaving soon, and you will forgive me if I speak bluntly. The universe grows smaller every day, and the threat of aggression by any group, anywhere, can no longer be tolerated. There must be security for all, or no one is secure. Now, this does not mean giving up any freedom, except the freedom to act irresponsibly. Your ancestors knew this when they made laws to govern themselves and hired policemen to enforce them. We, of the other planets, have long accepted this principle. We have an organization for the mutual protection of all planets and for the complete elimination of aggression. The test of any such higher authority is, of course, the police force that supports it. For our policemen, we created a race of robots. Their function is to patrol the planets in spaceships like this one and preserve the peace. In matters of aggression, we have given them absolute power over us. This power cannot be revoked. At the first sign of violence, they act automatically against the aggressor. The penalty for provoking their action is too terrible to risk. The result is, we live in peace, without arms or armies, secure in the knowledge that we are free from aggression and war. Free to pursue more… profitable enterprises. Now, we do not pretend to have achieved perfection, but we do have a system, and it works. I came here to give you these facts. It is no concern of ours how you run your own planet, but if you threaten to extend your violence, this Earth of yours will be reduced to a burned-out cinder. Your choice is simple: join us and live in peace, or pursue your present course and face obliteration. We shall be waiting for your answer. The decision rests with you.” To be honest, to be controlled by a group of eight-foot robots doesn’t sound to fun for me but the way our planet is controlled doesn’t fill me with much confidence either. I don’t really want to get in the political issues of the story but keep it really simple. The moral of this story that sticks with me personally is that the only people in this tale capable of believing the truth about somebody different from themselves and then helping that person is a Mother and her Son. This is such a great film and I barely scratched the surface on some of the themes presented but I just wanted to give my personal take on the film.

Well, where does this lead me to next, well I won’t beat about the bush and since I decided to cover The Day the Earth Stood Still I couldn’t help but think of the remake of this movie in 2008 starring Keanu Reeves. Keanu Reeves also starred in a film that I have only watched once and realised it’s about time I really revisited it, next time we will be watching A Scanner Darkly written by Phillip K Dick and directed by Richard Linklater.

Anyway, like I said earlier, I have been struggling for time lately and really do enjoy looking at these films when I have the free time. If you like this post then please leave me a like or comment as it is always appreciated. Thank you.