Well, what an eventful couple of months we have had when it comes to so-called blockbuster movies! We had Infinity War which was epic and Deadpool 2 what was really quite funny and action-packed. Apparently, though a little Star Wars film has been left out in the cold on its own, Solo to be precise. I just wanted to do a quick blog to say what I thought about the film without spoiling it for you. I won’t be going into why I think the film is struggling at the moment as every man and his dog is talking about that, I will just be talking about why I love it. 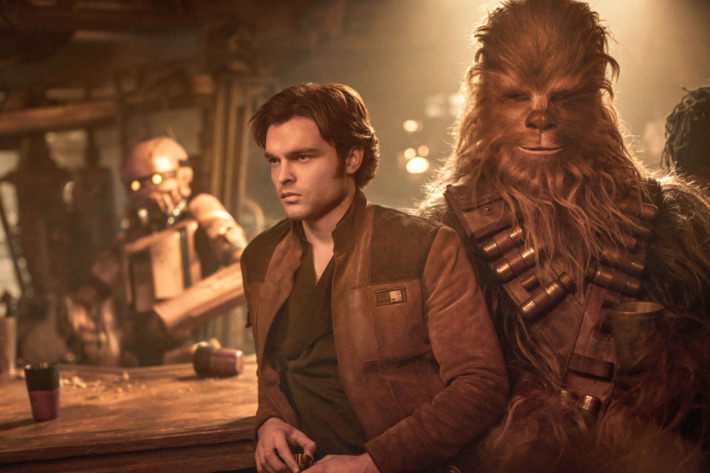 So, I don’t think it is a spoiler if I point out that this film is based on the adventures and origins of a young Han Solo from Star Wars, call it a prequel, maybe the prequel some fans have been waiting for! First great addition to this film is the cast as we have, these really are great performances. Alden Ehrenreich as Solo was always a lot to ask as Harrison Ford is so universally loved in his role as Han Solo. I will be honest, I forgot about Harrison Ford after five minutes so for me personally, you can’t ask for much more than that from an actor, very Impressive. Donald Glover as Lando, I don’t need to say much more. A really great role was played by Paul Bettany though as Dryden Vos. This character is one of the best Star Wars villains I have watched in a while because he uses his power to live a lavish lifestyle and become a collector of rarities, it felt like a real change of direction in this underworld of Star Wars plus he also has a yacht so I’m all for him.

The style of the film. Okay, I have watched this film twice now and my second viewing was a lot more enhanced than my previous, to be honest, I could not believe how drastic the difference was between viewings. Apparently, this is one of the most expensive Star Wars movies ever made and you can see that as you have really glorious puppets and creatures, beautiful sets and some amazing action scenes with meticulous GCI effects. For me personally, this film reminds me of the original trilogy more than any other new movie from the Disney era.

Donald Glover is Lando Calrissian and Phoebe Waller-Bridge is L3-37 in SOLO: A STAR WARS STORY.

The Soundtrack after a few listens really starts to get going. It has all the beats of an original John Williams score but with a fresh new take thanks to John Powell. For me, it’s about time they started pushing the scores into new directions and this is a wonderful piece of work. L3 & Millennium Falcon below is one of the highlights.

Finally, the best thing I enjoyed about Star Wars was the story. Solo has really impressed me because it the first film to remind me of the simplicity of the original trilogy. Those movies are a love letter to those serials from the 1950s such as Flash Gordan and Commando Cody. If anyone has read my blogs before know I am currently looking at those. It’s just a fun action movie with some great comedy. Star Wars was always meant to be just fun, If I want to watch some serious science-fiction, then I will watch Blade Runner or something else. To be honest, I am disappointed with the apparent failure of Solo as I think it is a really great film and deserves a little bit more respect. To be honest, I really ain’t going to start sweating over the future of a billion-dollar franchise either. I don’t want to know what happens behind the scenes or who runs the company, I just want to go watch a film and decide if I like it or not. Solo I did like so its 9/10 from me.

If you liked reading my review then please leave me a like or a comment below. Thank you for reading.